On Sunday 20th August, at 4pm, Fr Gregory Umunna, (centre) celebrated the 20th Anniversary of his ordination to the priesthood with a thanksgiving concelebrated Mass. Monsignor Aldo Angelosanto, (front centre left), Vicar General, represented Bishop Stephen Robson, Bishop of Dunkeld. Monsignor Charles Hendry (front centre right) and brother priests from the Diocese of Dunkeld and across the United Kingdom were joined by … END_OF_DOCUMENT_TOKEN_TO_BE_REPLACED

My dear brothers and sisters in Christ, Each year, around the Feast of the Visitation of our Lady, on the 31st May or the nearest Sunday, we celebrate the Day for Life, a day dedicated to raising awareness about the meaning and value of human life at every stage, and in every condition. Human life is a sacred and precious … END_OF_DOCUMENT_TOKEN_TO_BE_REPLACED

The Cecilian Choir have very kindly agreed to perform a Charity Concert at the Town Hall, Blairgowrie on Monday September 26th from 7pm to 10pm in aid of the planned reparation programme for St Stephen’s. The organisation for the event is well underway and tickets (at £10 each which includes a glass of wine and finger buffet) are on sale … END_OF_DOCUMENT_TOKEN_TO_BE_REPLACED

Gift Aid scheme is important to the parish. Last year we had a payment of over £6,000 from HMRC from our Gift Aid contributions, which is vital in helping maintain our parish. Gift Aid is available to all who pay tax as an incentive to generate some extra 25p from every £1 donations/offerings you make to the church. The form … END_OF_DOCUMENT_TOKEN_TO_BE_REPLACED

We are in the process of completing a Parish Audit of all people involved in working with children and vulnerable groups within our parish. Anyone volunteering to work with children in the children’s liturgy, catechism class and youth club, SSVP members, Eucharistic ministers taking Holy Communion to the housebound all have a legal obligation to become and maintain membership of … END_OF_DOCUMENT_TOKEN_TO_BE_REPLACED

Demonstrating the importance of alms giving through the FOOD BANK. As a follow up to our 2015 Lenten Talk on believing in community, we seek to demonstrate, in this last week of Lent, a practical aspects of community building within our three churches of St Stephen’s and St Luan’s and St Mary’s. The plan is to ask every member of … END_OF_DOCUMENT_TOKEN_TO_BE_REPLACED

Our SSVP Conference and the manager of the Dundee Salvation Army hostel have agreed that the Homeless Appeal for cupasoups and warm clothing should now be discontinued for this year. The Salvation Army are very grateful for all the donations from our parishioners and say that the hostel has sufficient stocks to distribute to their homeless clients for the remaining … END_OF_DOCUMENT_TOKEN_TO_BE_REPLACED

Everyone is invited to World Porridge Day in St. Stephen’s R.C. Primary School on Friday 11 October at 11.00 a.m. 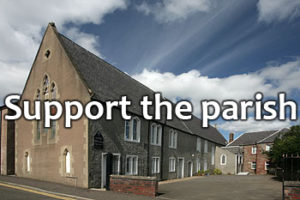